The day started early, shock of shocks,  I was wide awake at 6:00 so we decided to walk to  Bitter Springs  thermal pool which is a creek where we were. It wasn’t quite light until we arrived and it was very relaxing being the only people there. Floating was a cinch, I guess because of the minerals in the water and it was a therapeutic 33 deg. We saw a tiny Kingfisher diving for its breakfast and the perfectly clear water made his task easy, that, and the congregation of tiny fish near the water’s edge.

The pool wasn’t the same when other people started to arrive so we left for Katherine about 9:30. After seeing the look of panic on our neighbour’s face when we told him we hadn’t booked anywhere we decided we should go straight to a campsite but we needn’t have bothered, there were plenty of places but none of them with any elbow room. We couldn’t put the annexe up properly because there was no room for the guy ropes but having some annexe made us more comfortable and helped cool down the camper.

I bought pants and Alex managed to find some sandals, 33 deg is lovely when it’s the water temp and the morning is cool but when the air temp reaches that point I’m feeling overheated. We haven’t had the gradual build up we normally do. The pool we were both eyeing off was shut today because of filtration problems and won’t be operational tomorrow either. Damn! 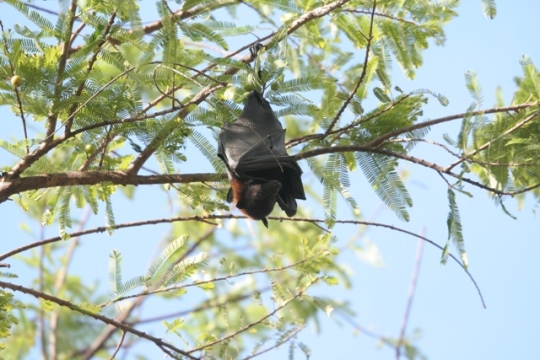 Fruit Bats, I think, one of MANY! 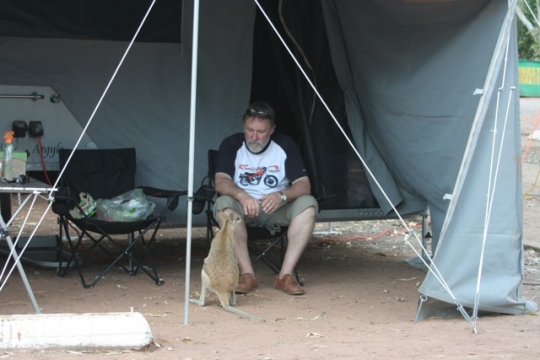