We left Windjana early and continued on the dirt road which was fine. As the person at Kununurra said, if we’d started at this end of the Gibb Road we would have continued, there were no wicked corrugations. It was great having the time to catch up with everything & to restock our supply of cider. We’ve enjoyed one each night and had used our last. Accomodation here is very expensive, we have a “Motel Room” which cost $150 for the night. It’s a very basic room with tiny ensuite but beautifully clean and there is also a full kitchen which we can use. The other motel was $195 a night and the hotel $250 a night, nothing looked salubrious.

The car started acting as if it had a flat tyre when were in Derby, getting lumpy on startup so we hope it’s nothing major. An air filter check is in order, we think. We’ve just has a nice meal from the Cafe on the Wharf and watched the sunset so that is our photo for the day. Tomorrow we head for Broome and have been told you have to line up from early in the morning to get into the caravan park but we’ll see. 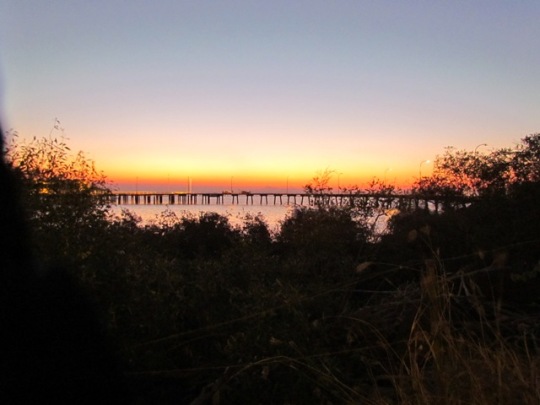 Our view from the "Catch Cafe", Derby.

No roosters this morning, just the loud “Honking of the Camper Bird”. We set off up the gorge at 6:30, which was AFTER breakfast. The ridges are part of the Devonian Reef which means the campground and all the flat country around are what was seabed. It’s all really too hard to describe, you need to see it but maybe the photos will give you an idea.

We became quite blasé about the crocodiles lazing about on the sand. I did expect a snapfest when one big crocodile started moving in on another’s patch of sandbank but it didn’t go beyond growling and mouth gaping. Luckily Crocodile Mac had his hearing on high alert and stopped us near some rustling grass. We stood and waited and gradually a snake appeared. We waited to warn the next lot of people coming up and the woman was in a tizzy about the VERY POISONOUS Brown Snake but Alex was remarkably calm. He said nothing at the time but afterwards told me he wasn’t worried, he was certain it was an Olive Python because he’d read about them on the info board.

It’s now only 11:30 and we’re back for R&R & showers while the campsite has only a few occupants. The water is solar heated so after an influx of campers during the afternoon the water is cold until the following day.

These National Park campsites are great, it cost us $11 per person because we already had a Park Pass, if there are no showers it’s about half that.

For  anyone who is interested our average fuel consumption according to the car computer is 12.5ltrs per 100kms.

Tomorrow we head for Derby and we expect to have Internet access again. 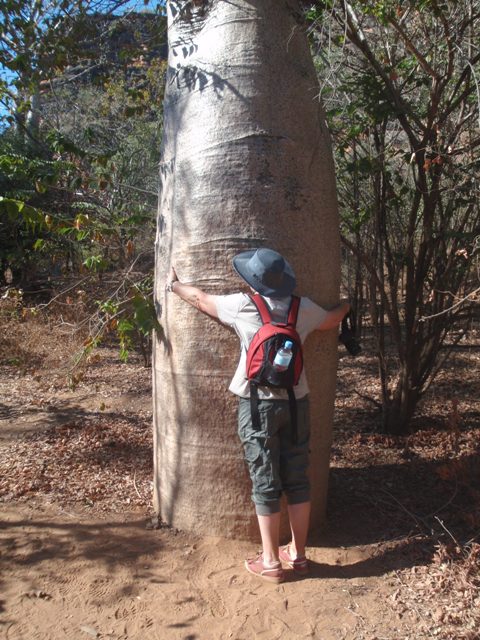 A Boab is worth a hug.

Crocodile Mac identified this as an Olive Python

This morning we had the weirdest noise yet to wake us, a rooster crowing. There is no house within miles so how could there be a rooster? It was in a cage on the back of the “feral’s” trailer. We were disappointed when what we thought was a goat turned out to be the 4th dog , with a coat on. When our neighbour, Heinz, appeared from his caravan perplexed about the rooster he’d heard we told him people had it. He said, “VOT?” so we pointed it out to him. He laughed and laughed then put his head back into the van and said to his Australian wife, “ Next time ve haff to take a couple of chicks wiz us.” Her response? “WHAT???”

They’ve been travelling for 18 months and are heading back home to Perth.

After that lovely start to the day we headed for Fitzroy Crossing. We saw a couple of dingos ( the first since the one welcomed us into Alice Springs) and some Brolgas. Fitzroy Crossing was interesting, the only white people we saw were the couple staffing the Petrol Station. We decided to continue on to Windjana Gorge because we had plenty of time. 40 kms west of Fitzroy Crossing we turned onto the Leopold Road, it’s unsealed but no really bad corrugations. Some wet crossings, red river sand and rounded rocks but nothing to make us wish we hadn’t started. I astonished myself by recognizing the countryside as Jundamurra country. I must have seen a documentary or read about it because the memory was so visual. I told Alex what I could remember of the story and later we found more information on display boards. I think there would be information about him on the net. It’s an amazing place and I love it.

Arrived at the campsite at about 1:00 so after we set up we went back to Tunnel Creek, I wish we’d known to wear shoes you could wear in the water because the info boards said strong covered shoes but when you get into the tunnel you have to wade through water and I wasn’t going to wreck my good Rockports. I took my shoes off when we reached the first lot of water and was just careful to watch where I was putting my feet. Alex followed closely “in the footsteps of”  a  French girl who just dropped her shorts and strode across in her very brief, tied at the hip, undies chatting away to him about the water depth. The pools inside the tunnel are about 20m across, some of them more but when it got to pools up near the top of my thighs I decided I wasn’t going to continue. I had my camera and a torch, the torch was a Dolphin so it would have been OK but not the Canon. A guy coming back said the water got up to his navel. The rocks are stunning, in some places coloured like marbled meat and there are stalagtites and also holey limestone. I found a big Green Tree Frog hiding in one hole near the entrance.

The night was another unbelievably starry one. 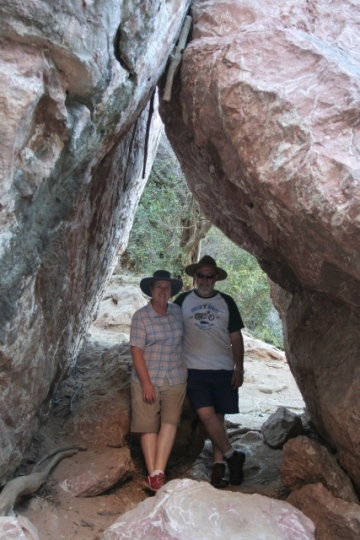 Outside the entrance to Tunnel Creek 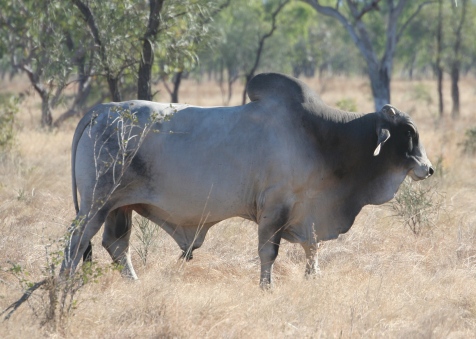