Streaky Bay 2 (jumped out of sequence!)

We got up. The wind got up. Yesterday was so nice here but what a difference the wind makes. It blasts straight off the sea and as the other campers seaward of us packed up and left we were more and more exposed. The annexe was flapping about and nothing seemed to stop it so we just decided to go elsewhere. The attractions of Streaky showed some loops you could drive so we went on the Cape Bauer Loop which was a nice drive but the Whistling Tubes weren’t whistling, the Blow Holes weren’t blowing and the Ospreys were obviously staying out of the wind. Looking down from the boardwalk where the Blow Holes were was quite scary with the waves coming in over a giant slab of rock. A boat was just around a bluff in a quieter patch of sea and we saw the “diver below” flag put up but didn’t see anyone go in while we were watching.

Because we’d been told the Cape Bauer Loop was the most interesting we changed our minds about going on the Westal Way Loop and instead decided to check out the Powerhouse Museum but it was closed so then we headed up the road to the Oyster Shed where tours showing all stages of the processing were advertised. A nice young guy there told us they don’t do the tours anymore but we could buy some oysters.

We decided to come back to the Campground, have some drinks and snacks while reading in the lovely big, clean Dining Room. When we reached the Dining Room other campers were already there and ready for conversation & then more arrived so we didn’t read but we did fill in and hour or more talking about different Camper Trailers, campsites and motoring skills/behaviours. After that we walked on the beach so not much to report today. Tomorrow we’ll go to Point Labatt where we’ve been reliably informed there are plenty of Sea Lions to see then we’ll go on to Port Lincoln. Depending on the wind we’ll either stop there or find somewhere more sheltered. 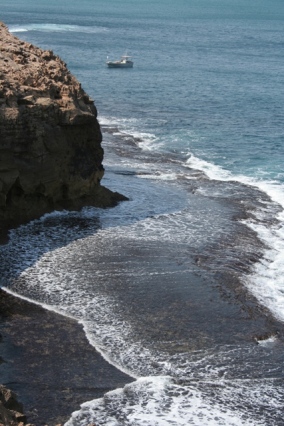 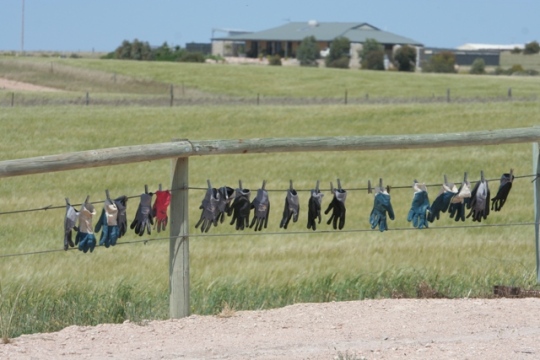 Not sure how the Oyster processing goes but I know they need gloves!

Despite the forecast of very strong winds starting at 12:00, the night was reasonable with only normal rain, and the morning looked lovely so we took the opportunity to look around Lincoln for a while. We went to the Lookout and cruised around some of the streets looking at the “Tuna Mansions”. We saw the statue of Makybe Diva on the foreshore yesterday. Neither of us had any inclination to go Tuna feeding or swimming in a cage beside sharks and with the awful weather forecast on our minds we decided to head for home and just see how far we got before fatigue set in. We thought Tumby Bay was a nice little place and spent some time in the Bakery there but when we left we could see the dark clouds forming behind us and we could see bands of rain radiating from them. Before we reached Whyalla the rain hit us and by Port August although the temperature was still 28 deg. the wind was really buffeting the car. By “The Tin Man” near Port Pirie it was only 12 deg. black sky, strong gusty wind and heavy rain. Driving was difficult because the big trucks not only caused blinding sprays of water but also added their draught to the wind gusts. We felt sorry for all the campers heading off up the road in such foul weather while we would soon be in a nice, solid house where we could shut the doors and leave the weather outside!

The holiday is over, the unpacking begins …………….tomorrow.

It was a beautiful morning in Streaky Bay, calm and sunny so we took our time packing up. There was a very strange noise coming from trees near us and eventually I saw a couple of herons, canoodling, I think. I would never have expected to see them in trees but maybe they’re like Storks.

After yesterday’s disappointments we were looking forward to seeing the promised Sea Lions and we weren’t disappointed this time. There wasn’t an enormous number, maybe 30 and they were spread out over different rocky areas but they were quite active. Different ones went swimming and the water was so clear you could watch them all the time, some sat up watching and others looked like giant slugs stuck to rocks. One quite big male made his way out of the water and it was interesting watching the reactions of those which had been lying peacefully before. I presume it was a younger male that had to move away closer to another group of peaceful sleepers.

After the Sea Lions we went to see Murphy’s Haystacks which we’d been told were just a few rocks like you’d see in dozens of paddocks but we liked them. The shapes and textures were interesting and we certainly didn’t mind donating a couple of dollars since effort had been put into making the place a pleasure to walk around. The farms around are certainly looking lush but lots of sheep look dirty and thin and we thought they might have been brought in from a drought affected area.

We also went to see the Woolshed Cave which I found scary. The water has cut giant troughs through the rocks and the waves force the water up the troughs ending with forceful sprays before the water recedes again. The sides of the troughs weren’t level and looked as though they were coated with slippery sand so neither of us ventured too far towards the cave. The top of the cave had very interesting rock formations and there was one Native Bee hive hanging from the roof.

The dirt roads seem to have Sleepy Lizards crossing every few hundred metres and countless squashed ones. I’ve never seen one following another hot on its tail before and wonder if it’s mating time because we saw at least a dozen like that.

We arrived in Port Lincoln late in the afternoon so only had time to set up ten go into town to find some food. Almost all the sites here are drive-through so that’s a plus but they’re very narrow so no room for the annexe, in fact, the pull-out kitchen reaches the edge of our space. Tomorrow we’ll have a good look around the place if the weather stays nice.

This one is more of a wave than a haystack -Murphy’s Haystacks, Streaky Bay 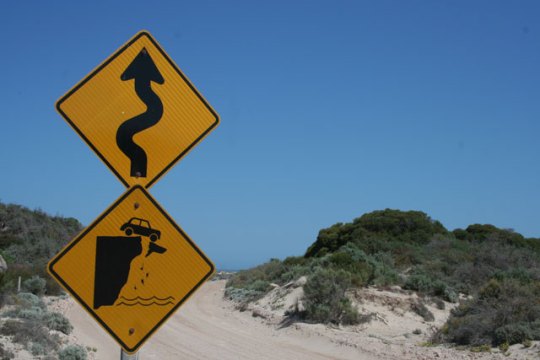