On the road again…. Because we were in a hurry to get a site in Denham we passed a few interesting places so on our back down the peninsula again we stopped. We had a second look from Eagle Bluff but still no sign of marine life so we headed on to Shell Beach. Although they are mining the beach, and selling to poultry keepers, & for use as paths etc, they ask that you don’t take any shells away. I cannot understand the logic, even if 1000 tourists took a handful of shells it wouldn’t equal one scoop of their front end loader and there were hills of the stuff they had piled up.

After Shell Beach we called into Hamelin Pool were there were flies by the zillions but we persisted and went to the place where they had previously mined the shell composite and where there are Stromatolites. If  you want an explanation of them I hope the link below will help. When we were in the café there was an extract from a Bill Bryson book pinned to the wall and he said he had to give up his walk to the Stromatolites because of the flies. I wish we’d been able to read more of the book, maybe it will be available for my Kindle.

If you want to see some info check here.

When we were driving back on the main road we saw a very frazzled Emu trying to keep his brood under control, I think he had about 6 but as you can see from the photo they’ve all scarpered. I can’t remember which side of the Vermin Proof Fence he was on but they have fenced across the  narrowest part of the peninsula, culled feral goats, baited for rabbits, foxes etc and are trying to eradicate all the feral cats but they’re still a problem. Some native animals have been reintroduced and we saw signs warning drivers to watch out for Bilbies but we didn’t see any.

Arriving here was stressful, we haven’t been near a big town for a long time and in fact we haven’t even made it into Geraldton yet because the Caravan Park is on the northern side. When I was booking in the woman remarked on the wind that had sprung up and said it hadn’t been at all windy! Grrrrr We’ll be here at the Sunset Beach Caravan Park again tomorrow night. 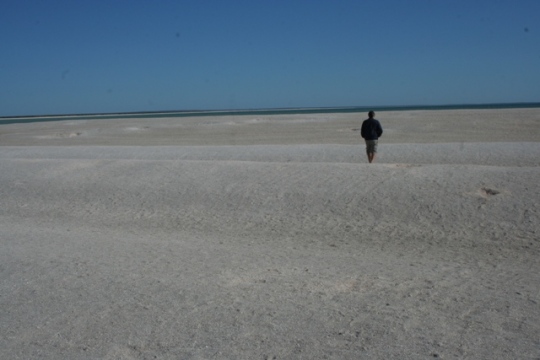 Alex on Shell Beach -there is no sand, it’s all tiny shells. 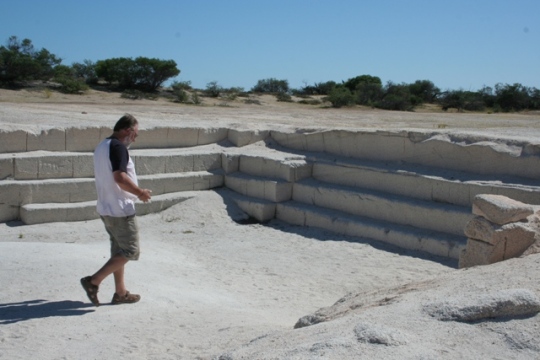 Hamelin Pool -the old quarry. The only blocks taken from here now are to replace ones in historical buildings. 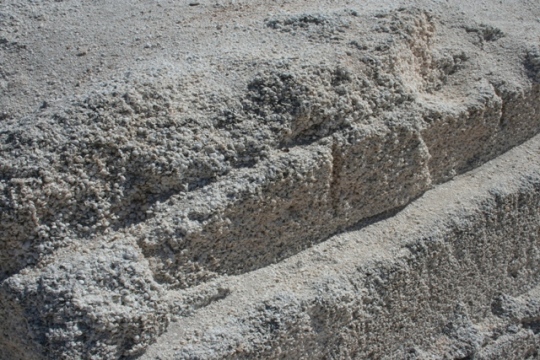 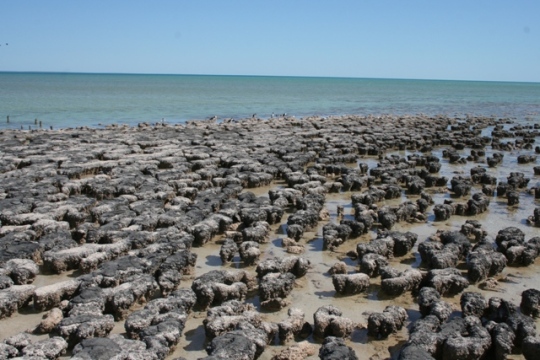 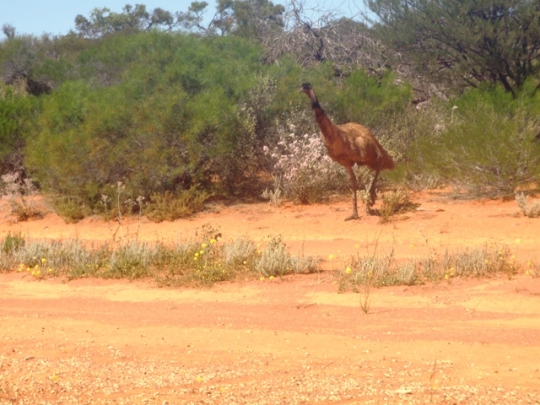 Poor Papa Emu, his kids have taken off in all directions.