Geraldton wakes up on Monday morning! There was a lot of traffic going through the town and the feeling was very different from yesterday. No time to look at jazzy buildings today.

The landscape changed and there were hobby farms, green paddocks and windmills. The cattle we saw today were all like Murray Greys or Angus, not the Brahmins anymore. No emus today only dead kangaroos and two live foxes.

We drove along the coast road and it was lovely getting glimpses of the sea. Our coffee and cake break was at Dongarra and I am now officially off Cheesecake. It was only 215kms to Cervantes so we were here early and went off to see the Pinnacles. I imagined very tall structures but they’re not. What is impressive is the number of them and the setting, it looks like real Badlands, desert with thousands of rocky shapes jutting up out of the sand. We were able to drive around the track stopping whenever we wanted but as we left we saw 4 big tourist buses in the carpark and hordes of people crossing to the Information Centre so our timing was excellent.

When we came back we went around the town and down to the jetty, we dawdled at the jetty so that took about 20 mins. The seafood for sale sounded very tempting but when we went to the Lobster Shack the seafood packs were big enough to feed our entire family at Christmas and there didn’t seem to be anything available for a single meal. On our walk around we were amazed by one house that had a very big boat in the front but when we saw it from the back the entire yard was filled with Cray Boats all with clever names which included “line” eg Out of Line, Production Line. There is no doubt what the major industry is in the town, in fact the town was created to service the Crayfishing Industry. Once again the town is named after a shipwreck! 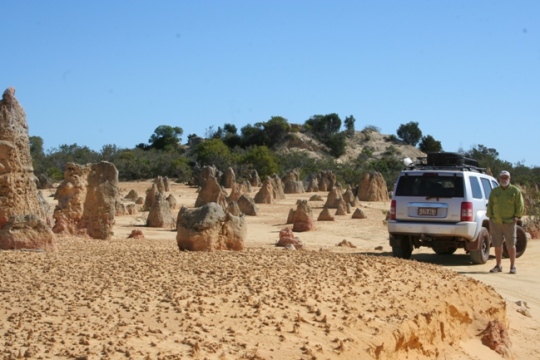 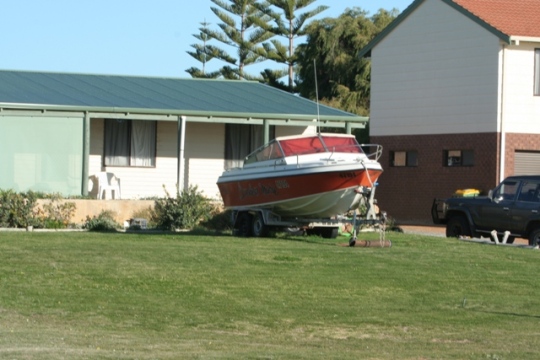 Some people have little boats. 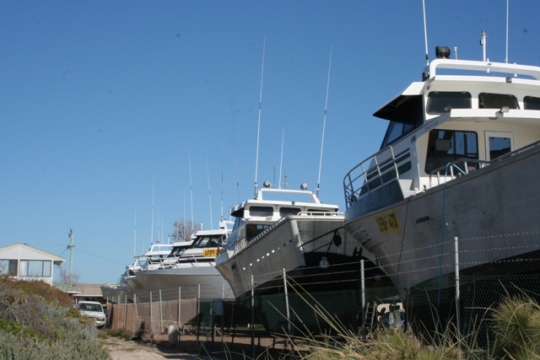 Some people have LOTS of BIG boats!

Another windy night and a neighbour told us people who were on this site before have headed for home, beaten by the wind but they are crossing the Nullabor so I think they’ll have a lot more to deal with yet. Maybe the next time we go away we’ll remember that March and September are the windiest months and avoid them.

Geraldton isn’t lively on a Sunday. We missed the Market that was on near the Info Centre but we weren’t looking for it anyway, just stumbled on it coming back from the Wharf. There are 7 big ships waiting offshore  so I think even the big dock is closed on Sundays. We had a very tasty lunch of Fish & Chips at the wharf but before that we went to see the memorial to the Sydney, it’s a real work of art. The dome is made with seagull shapes, one for each sailor who died and because it’s on a hill overlooking the sea I think it will look fantastic as a silhouette against the sunset so we’re going back again later.

There is a good Museum here, recently built with plenty of information about the various wrecks and also salvaged materials. There are also displays related to mining in the area, fishing and Aboriginal history. The Abrolhos Islands have been the scene of most wrecks and fishermen put huts there for use during the Lobster season now apparently there are plans to make islands available for tourists –book your own island for a holiday. It will be interesting to see how that develops.

There are lovely new buildings around the town and the colours of some remind me of new brightly coloured Qld houses. The modern “row houses” look terrific. No shops are open in the centre of town but the shopping centre in Sunset Beach was open so we don’t have to resort to our “K rations” now. The fridge isn’t big (unless you’re lifting it or finding space for it) so we can’t stock up for more than a few days.

Tomorrow we’re heading down the coast to Cervantes to see the Pinnacles – maybe we’ll find windmills and Don Quixote.

Memorial to the sailors who died on the Sydney when it was sunk by the Kormoran in 1941.

A seagull represents the soul of a sailor, there is a seagull for every sailor who died. 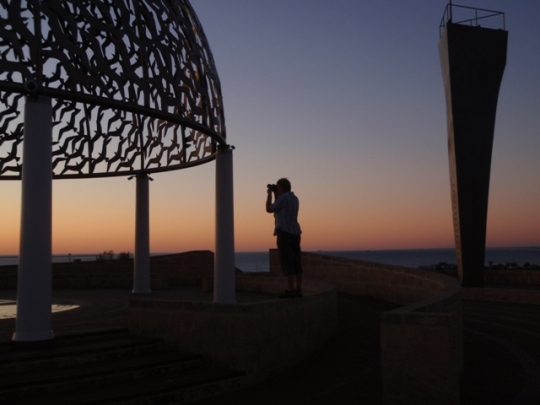 Another of Alex’s sunsets.

Statue of the “waiting woman”. 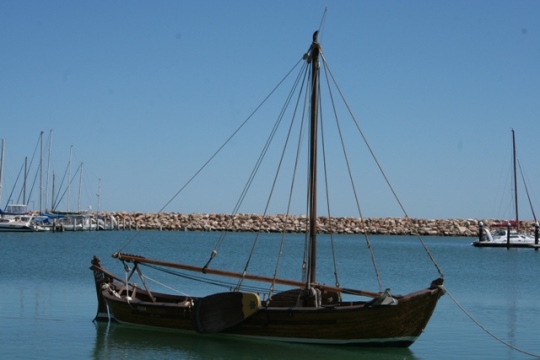 More than 40 people set off to Indonesia in an identical boat to get help for survivors of the Batavia shipwreck. They made it .