No other campers came into the parking area last night so we had lots of space. At the old telegraph station , Eucla, yesterday we were talking to some people travelling in a big red bus, they had to hand over their fruit and veg, and even the bird seed they had for their birds. We expected to be stopped by the quarantine mob when we crossed the border so we gave them all the stuff we had but we weren’t stopped at all. Rather than buy more then have to relinquish it near Ceduna we had a make do meal with some left over bread roll from Esperance, steak and Tomato Relish. The steak was fine and the relish added a touch of piquancy ( for any foodies) but I can tell you Turkish Bread which is worth delaying your departure for on Day 1 is very tough and not worth fighting over on Day 2!

We packed up and drove out it was 7:30 SA time so we stopped for some breakfast at Nundroo. Alex is very relieved that the long stretches are behind us. We’ve been trying so hard to obey the road signs and watched for wombats all the way but only saw 2 and they were “out of this world” or to put it more bluntly, dead. Thevenard was our next stop and from a lookout we could see lots of seabirds clustered on rocks and then someone pointed out some seals. We had fun watching the antics for quite a while.

Smoky Bay didn’t have anything to keep us there so we came on to Streaky and have decided to stay for 2 nights. The Campground is nice, right on the waterfront but hopefully not blasted by winds, the amenities are perfect and there seem to be interesting sights to see. 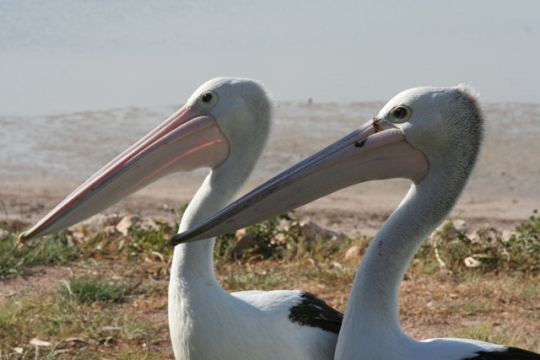 Pelican Pair hanging out at the fish cleaning station.