Although we’d thought of several different things we’d do today we decided to just cruise. I wanted to get photos of sculptures I knew were beside the river and now that we know our way around more we knew that it would be an easy walk. The sculptures are just great, some we’d had glimpses of from the Bum Boat but others were lovely surprises, like the cat and two kittens. That reminds me. Since we’ve been here we’ve seen 2 dogs, one outside and Army Base & a Sniffer Dog today with Police. Not a single cat and not many birds. Not a single bug either apart from butterflies, many of them black.

After the river walk we headed to Raffles so Alex could have a genuine Singapore Sling. I dislike like the idea of colonial superiority it exudes but know this was just a bit of fun so I had a “Virgin Sling” ie non alcoholic & it was delicious, taste of pineapple & lime, with a wedge of pineapple and a Marachino Cherry, very refreshing. There was plenty of flash popping and camera swapping as everybody around wanted photos of themselves at Raffles. From the sublime to the ridiculous… or was it the other way around maybe….. we went back to have lunch at Sidewalk. I did get a photo of the place but at lunchtime it’s just not the same. Few people sitting outside at the wooden tables and plenty of room inside but it was our last chance to have a nice feed of “local” before we left for the Airport.

I did manage to pick up a spare battery for my camera after the necessary arguing and attempts to leave the shop but it was made much easier for me because I could quote eBay prices. The battery was marked $145 but he’d do me a “special deal” at $75 before eBay was mentioned. I paid $40 Singapore.

Now we’re enjoying the relaxing atmosphere in the Ambassadors Lounge prior to our flight. Alex thinks it was worth coming in here just to see the group of geriatric Australians being firmly ejected by the receptionist & protesting loudly about it. Singapore Airlines recognised what a problem Alex was and has put quite a distance between us, I have the priority seat with no one in front of me and he has steerage wherever that is! 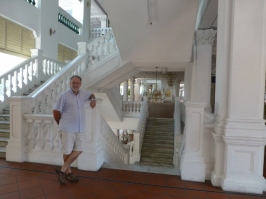 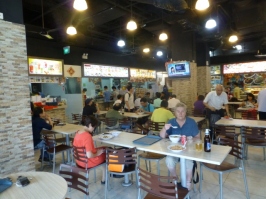 Thunder woke me up about 6:00 and there were big flashes of lightning but nothing scary. We planned to go to the Zoo so I was pleased that there was no rain. The bus came past the Hotel at 9:30 and I imagined we’d travel out of the city, through hinterland to the Zoo, because I’d seen on the map it was quite a way from the City Centre & the journey time was an hour. I think 45 mins of that was built up with mostly high risers but it was interesting seeing all the different architectural styles. The last part of the trip was through very dense “jungle”. I’m sure that’s not what you’re supposed to call if but that’s what it was to me.

The Zoo was excellent. Our tickets entitled us to ride the little “train” painted in Zebra stripes (not the Tiger stripes, that required different tickets) but we didn’t use it once.  Walking along the shaded paths was lovely. When we reached an amphitheatre where staff were preparing for a show, groups of school kids starting converging on the place and then the rain came down. Great heavy drops so then people rushed in from every direction. We were lucky, we found an umbrella. Although I had the muscle to carry it I didn’t have the skill to use it properly so Alex took over!

When we were at the Babirusa exhibit I noticed an information plaque printed in Braille and I thought how inclusive that was but then I was just struck with curiosity. What could possibly be written on it? A description of a Babirusa? A warning of the dangers if you should bump into one? Maybe the plaques were at each exhibit but I didn’t notice them and anyway the same question applies? What benefit would a blind person who can’t see the animal get from it?

The White Tigers were stunning and what a performance! I would never have believed Tigers could be “toilet trained” if I hadn’t seen the impeccable performance. The clean-up fish were perfectly trained too. We could have watched the Orangutans for hours, there were two babies showing off their skills on vines hanging between trees.

There was no need for dinner tonight, we both ate “local”at the zoo, HOT main course and later an amazing ice concoction with dark red bits, green bits, white bits and ice. The only things we could identify were coconut cream and ice. We did go back to Sidewalk so Alex could have his pint of Tiger Beer. Yes, pint 633mls!

The Trishaws were out in force again when we went for a walk along the river. No $3.50 meals in the Eateries along there.

When we were in Little India yesterday the shops selling gold jewellery were just milling with people, it was amazing. We presumed it was always like that but today in the paper there is an article saying that since the price of gold has dropped dramatically shops have been inundated with people wanting to stock up on gold bars and heavy items.

Unfortunately lots of my photos are duds today, the setting moved in my bag but Alex has some good ones to fill in the gaps later. 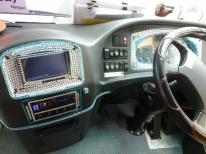 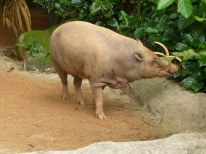 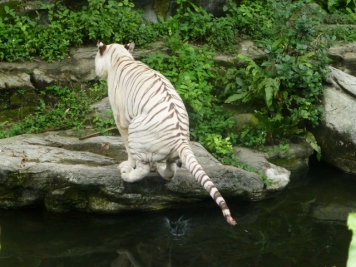 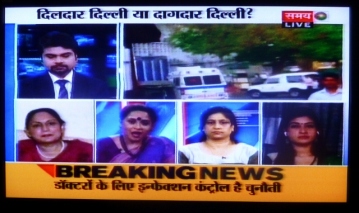 Did you get that Breaking News? 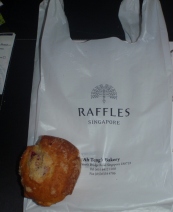