Today we discovered that we really had left “the folder” which contained our Car Hire agreement, insurance papers etc at home. About a week before we left I deliberately put it in my case so we wouldn’t forget it but it must have been taken out to check something and not put back. The car hire papers stated that they had to be produced to verify our Internet booking, also required was some official document showing our name and address. We went to the Car Hire company not expecting to collect a car but I guess they’d seen our type before and they were very helpful. Hopefully one of “the kids” will fax the info when they’ve managed to find the absconding folder. Not only did we get the car but we’d been upgraded, I think the photos will tell you how Alex felt about that. The car is so nice to drive that we decided to take a run to Dingwall and then it was still so nice we went to Strathpeffer. The only irritating thing about it is whenever you brake and stop for any length of time the engine is switched off, taking your foot off the brake restarts it. Maybe we’ll find out how to override that economy feature, regardless it will still be fun to drive.

When we were in Strathpeffer we walked to the, ”Eagle Stone” a relic from the 7th Century. The town has a collection of amazing Victorian era buildings, people came to take advantage of the natural spas. I can’t imagine anyone enjoying the waters in today’s weather. COLD! 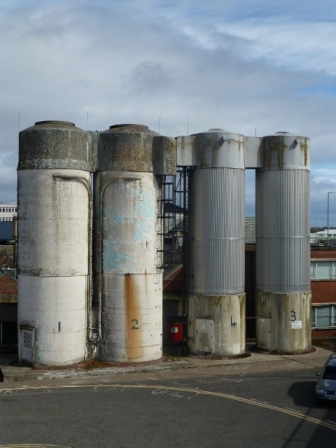 We have serious concerns about numeracy education in Scotland!

In amongst wild Jonquils.

Just one of the stunning buildings in Strathpeffer.

I did have someone familiar to lean on after all. When we arrived at the Boarding Gate the Supervisor was able to give us our allocated seats. Lots of kids on the plane and all good ones. Food, food and more food. The grinding noise coming from under our feet fortunately stopped when the wheels finished retracting.

After hours and hours and hours on the plane it was such a relief to see the minutes ticking down on the Flight Path display. Both of us probably slept for a couple of hours which was good. We arrived at Heathrow at 5:30 and it didn’t take any time at all to clear Customs and be out heading for the Heathrow Express train. First Class seat because it’s tied to our booking on the train to Inverness. Only 6 of us in the pristine carriage. No Singapore Slings though, just comfy seats and peaceful atmosphere.

The train took us to Paddington where we had to change to the Tube but we had no ticket. There was a machine but it didn’t give change and we wanted to buy an Oyster Card. The Ticket Office wasn’t open because it was too early, luckily there was a guy wandering around and he told us to go through the gates and continue to Edgeware. We went a few stops to Kings Cross Tube Station but we couldn’t get through the barriers because we didn’t have a ticket but when we explained where we were going the guy there just waved us through. . Kings Cross Train Station has a very impressive new roof, definitely worth a couple of photos as were the ATMs clearly stating “Free Cash Withdrawals”. I wasn’t  the only person who thought that was worth a photo.

The train journey was l-o-n-g but until Newcastle we enjoyed the company of a Canadian couple who sat opposite. Coming through Newtonmore, Kingussie and Aviemore was very interesting because we could see what had changed and what looked just the same. We saw our old house but will go back to see if the Bleeding Hearts are showing in the garden. Some plants are beginning to show signs of life after winter but others still look dead.

Seeing Lena waiting to meet us at the station was lovely, taking possession of her bed at 10:00 was sublime. I think we were both asleep within 2 mins.

I would expect a l-o-n-g queue, guess Scots are just not interested in money.