After another lovely big breakfast and taking a few photos of waterfalls about the place (they looked much more impressive this morning) we headed into Fort William to find some info on the pre-1965 Motorbike Trial that was scheduled for today and tomorrow. We found the Information Centre and discovered that the trials were out near Kinlochleven After a hot drink we went back to the car to get more layers to put on, we thought it was freezing. By the time I had a vest, shirt, jumper, warm jacket and Rainbird jacket on as well as leggings and Jeans I felt like a Michelin man. We drove out along the Kinlochleven road until, we found a place where people were waiting for riders to come through. We had to climb up the hill and the grass was so slippery the best option was to walk up the rocky “path” where the riders would go and which was already running a little stream. Both of us made it safely to a spot near the top of the section and then we waited in the drizzle along with lots of other quite jovial people. I think we all saw the madness in what we were doing but no one wanted to leave. When the first rider appeared along the road it was a relief, some people were joking that the stage had probably been cancelled and no one had thought to tell the Observer. The first guy walked the track then was given the OK to start. He made it up the rocks until he was just near us then created quite a hole in his struggle to get going. He incurred penalty points for putting his feet down but did get out, scaled the big rock step and made it to the top without going outside the designated line. After him every rider seemed to get tossed off course at the big rock step and they were eliminated.

By the time about 15 riders had gone through we knew it was time to go, our gloves were soaked and my lower half was wet to the skin. It was just too cold to stay. We struggled down the wet stream after my effort to walk on the grass ended with me on my knees. Near the bottom was a beautifully restored black Velocette just waiting to go so we waited to see how he coped. He showed everyone how it should be done and came back down the hill past us beaming, so pleased with his success.

We put what dripping clothes we could in the back and were relishing the warmth of the car until we came to Spean Bridge where we decided to get out and look at the Commandos Memorial. GIANT MISTAKE. By the time I’d walked from the car then up the few steps to take a photo my Jeans felt as though they were icing up. I didn’t waste a second getting back into the car and told Alex I wasn’t getting out again until it was to go into the house for a hot shower even if we did come across the Public Conveniences we really wanted to check out. He agreed. The shower was marvellous. I’ve sponged up the water from the back of the car but we’re still dealing with the wet clothes.

Tomorrow we return the car and we’ll both be sorry to give it back. I’m planning to get some more substantial footwear just in case the weather continues to be unfriendly. Maybe the sun will show its face again tomorrow.

View from front of Corriegour Lodge over Loch Lochy.

Wouldn’t want to drop this one. 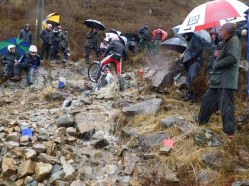 Starting up the hill. 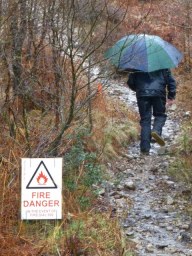 Believe it or not we were up and packed before we even had breakfast which was a full on affair, enough to keep us going all day. ( I was right, I don’t want to eat Black Pudding!) Alex was booked to play golf at 10:40 so we drove around the little country roads a bit before I dropped him off.  One guy arrived wearing Plus Fours but they let Alex in wearing “normals”.

I headed off to find some caches. I met a woman and she strongly recommended I do a circuit of “Bluebell Wood” and asked if she could join me. There were no flowers, it will be another couple of weeks before they’re out. I did see a Red Squirrel but no photo, he was far too quick in his getaway. I walked for miles and found 4 caches before it was time to go back for Alex. He thoroughly enjoyed his solo round but I was sorry that he hadn’t had to socialise with a local.

Driving towards Dunkeld we saw lots of pheasants, about 10 in one field alone but still no photos. The rain started when we were going over Drumochter towards Dalwhinnie and was still falling when we reached Corregour Hotel on Loch Lochie. The view out of our window is postcard material ….. well it would be if there was no mist!

A very special dinner tonight, delicious. We were in Fort William 40 years ago, no way would I want to swap the BMW for Yamaha Trail bikes or the Hotel for a tent, especially in this weather.

View from our room.

Checking out the bag before heading off.

Trying to impress the lady.

Alex at the window of our suite.

Roe Deer on the 4th Hole

Looking through the Mens’ locker room window towards the 1st Hole. Blairgowrie, Rosemount.

Roe Derr on the 4th hole.

18th Green with clubhouse in the background.

Caching in the Everglades?