I can never imagine myself enjoying one of those guided tours where 45 people are woken at dawn, herded into a bus & driven to see all the wonders of any given place, complete with running commentary. Today however, we did enjoy having our own personal “Tour Guide” regale us with stories as he took us to some significant places around Inverness. For me the best story was of the policeman called to an accident in the town where a horse had been killed. After investigating the facts he had to write a report and there was a problem, he couldn’t spell Tomnahurich Street. Solution? He asked spectators to drag the horse around into Kenneth Street and then he wrote his report.

Another story explained the Cumberland Stone where according to legend the Duke of Cumberland stood when he ordered the English soldiers into battle. He stayed safe on the stone while his soldiers slaughtered the Scots at nearby Culloden. His battle plan was ingenious but he’s known throughout Scotland as Butcher Cumberland. Alex remembers his Primary School teacher, Miss MacGregor, telling the class about “Butcher Cumberland”.

An interesting slant on the Flora MacDonald and Bonnie Prince Charlie story was that he abandoned Flora (his rescuer) and fled to France where he died in his late 30s an embittered alcoholic. Flora went to Canada, got married and had 12 children.

Our Tour Guide even had a story about Highland Cows. According to him Mary, Queen of Scots, didn’t like the black Highland Cattle so in her herd she had them bred out by the red ones. Now the red ones are the most common and people pay more attention to the black ones.

The chambers were aligned with the winter solstice and in this one quartz was used on the back wall so on the shortest day of the year the setting sun reflected off the quartz. The chambers probably contained buried remains but no one really knows.

Relics of an OLD Scottish civilization.

The fence might have been on the property border but the stone had to stay.

The black ones have been relegated to the background! 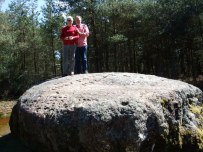 We’re for peace, not war!

Comments on: "Guided Tour Around Inverness" (1)