After another big breakfast we packed up and left to do some driving about before getting on the ferry at about 1:00. I managed to get some photos of what I thought were Judas Sheep but are apparently Black Hebridean Sheep. The behaviour of the young ones makes me think they’re close realtives of goats, they leap about with all four feet off the ground and seem much cheekier than normal lambs. The adults have wicked looking horns. Twitchers were about everywhere and as Alex and I walked back to the car a man armed with binoculars came from his car parked up the road a bit and headed straight to where we’d been. I’m sure it was beyond his comprehension that we’d be looking at sheep, not birds.

We stopped at a Broch which was on a small island which would have been accessible by foot at low tide.

The ferry trip was great, we thought we’d worked out the channel navigation markers, red on the right and green on the left but then it changed so we really don’t know. Going as the bird flies would have been a very quick trip but the ferry had to weave in and out between islands and rocky sections. One small island not far out of Leverborough seemed to be covered in seals.

Driving up through Harris the road snakes its way through rocky hills, not hills with piles of rocks but hills that seem to be all rock. Inhospitable hardly covers it.

The cottage here has no WiFi or phone coverage, it’s like being in a time warp. We went into Stornoway so Lena could phone the organiser of family get togethers (Chrissie) and in the Tesco carpark she met Chrissie’s daughter which was just as well because her contact info was on Facebook, not accessible without WiFi.

We’re planning a nice long walk tomorrow morning, in this area Sunday is still very much a day for church but in the afternoon we’re going to see Alex’s cousin, Mary, who is on Lewis for a holiday and is staying in the old family home at Keose, a village about 15mins away from Stornoway. 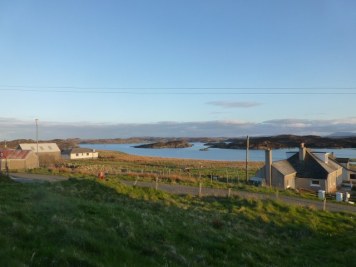 View from our BandB taken at 9pm.

Hebridean Sheep, tehy seem to me more like goats.

Crofters just turn the sod over, seed and rake then use a roller.

Some lambs are lucky, they get little blue raincoats.

Renovated cottage with a Peat Stack beside the shed.

Comments on: "Berneray to Harris" (2)