After packing up our gear and getting everything into the back of the car we left “Seaview Cottage” and set off for Stornoway. Lena and Mark dropped us off so we could walk around until it was time to go to the ferry. We went straight to the Art Centre and spent some time looking at the Art Works displayed then we went to the cafe because they know how to make a good Flat White. When we came out I decided since we were just walking around I’d check the GPS for caches and found three close by. Two were beside the sculptures of Herring Girls and the third was also down by the harbour, we’d actually been right there before I’d checked the GPS. I was happy finding 3 out of 3 especially as two were minute.

Alex particularly enjoyed walking about the wharf, checking out the rusty trawlers and deciding which would be best for making trips from Cromore to Stornoway. After going into a couple of cafes not far from the wharf and coming out just as quickly we decided the best idea was just to go to the Ferry Terminal. Lena and Mark were already there so we just waited until it was time to drive on.

Because I’d heard many times that the trip across The Minch could be very rough we went straight to the front seats, I wanted to be able to watch where we were going. When the captain announced there was a northern swell and there could be “some discomfort”. I wasn’t worried but I still didn’t eat anything, just in case. I sat and watched the waves and the swell without any problems until maybe half way across then I had to go to leave the window for a “comfort break” that turned out to be the exact opposite. I was SICK and SICK and SICK!!! About half an hour before we docked I was able to get out onto the deck. Alex and I walked about Ullapool while Lena did some shopping and we saw the very exposed camping ground where we’d stayed in 1974, our tent was one that managed to stay in place while fancy bigger ones ended up with bent poles and “billowing sails”. We had to spend at least one extra day there because the sea was too rough and the ferry couldn’t run. I wasn’t sick that time.

It seemed a long drive “home” to Inverness and a welcome bed. 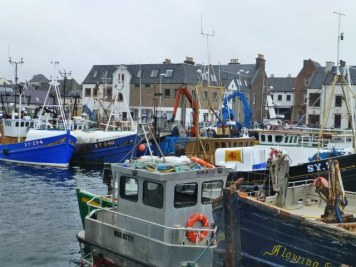 One part of Stornoway Harbour

Border Collies are THE dog on the Islands.

This morning when I looked out of the bedroom window I saw the hills reflected in the loch, it’s the first time I’ve seen that because the water has always been too rough. I’m hoping it will be the same tomorrow when we take the ferry across The Minch.  I don’t want to have any stories to tell about a rough passage back to the mainland.

Since arriving at Leverburgh we’ve now travelled from north to south on the east and west sides. Today we went south down the east coast of Harris on mostly very narrow twisty roads. We went across the Scalpay Bridge, along the narrow bending roads which at times seemed to almost go through people’s kitchens and into the town. When we arrived at the loading dock for the Fish Farms I heard a distinct sigh as Lena finally felt safe enough to breathe out! We didn’t hear any, “I’ve got four bars” today as we went up the hills, she was too scared to take her eyes off the road to check for phone signals.

When we were at our North Uist B and B a cyclist told us the east coast road was “a must” and recommended the Skoon Gallery Café so we bypassed another and were very pleased we did. We were able to sit outside in glorious sun and enjoy scones, jam and cream, apparently delicious coffee and definitely fine hot chocolate. At the table next to us were 4 “Twitters”, according to Mark, quite easy to pick really with the inevitable binoculars. I think they would have seen more birds in South Uist.

The view of Loch Seaforth was absolutely stunning and so was Luskentyre Beach but there were always amazing rock formations, many, many lochs and houses built in places that make you wonder how it was managed. I can’t help but wonder what people living in such isolation do, they can’t be all retired English wanting to escape the world and although the distances aren’t great I’m sure in the winter the roads would often be closed. If they’re scary when they’re dry they would be terrifying or even deadly with ice on them.

Tomorrow we get the ferry about 2:00 and I’m hoping that the wind that has now picked up will drop by then. We certainly all enjoyed the beautiful weather today. 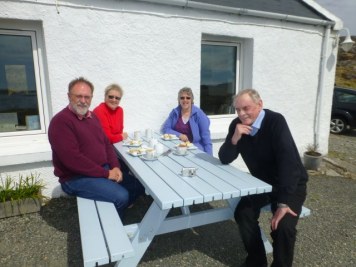 Enjoying SUNSHINE outside the Skoon Gallery.

Typical postcard view of white cottages on a hillside.

The most impressive modern stone house we saw.

Anyone for a bit of Harris Tweed? 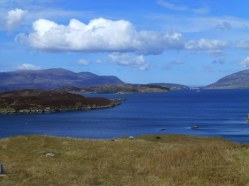 The Past -Distant and Recent

Today started with another beautiful sunny morning but by 9am the dark clouds had rolled in again. Because we had plans for dinner at 6:00 we decided to make today’s jaunt a shorter one. We went west again but this time not up north Bostadh Iron Age Village. After a severe storm in 1992 features of an Iron Age village became visible where sand had been blown away. Five houses were excavated and another left untouched but they had to be reburied to protect them from weather damage. A house has been replicated using the techniques of the day and is safe above the water line. Unfortunately it wasn’t possible to see inside it, the entrance has been blocked and there is no notice explaining when it will be reopened but I did manage to get a photo of the inside and you can see the central fireplace. The house is an impressive construction.

The village is on the shore of a stunning bay and there is a “Tide Bell” visible. I have no idea how it works, it seems to me that by the time the bell rang anyone on the beach would already be in a dire situation. Maybe I’ll be able to find more information when I have access to the net.

Coming back from the Iron Age village we saw a sheep with devilish horns, there are far more interesting sheep around here than I’ve ever seen in Australia. For such a cold place I’d expect the sheep to have thick, strong fleeces but these sheep lose their wool if they’re not shorn and we’ve seen sheep which have already lost most of their wool and the weather definitely isn’t warm. Today did however turn into the nicest, sunniest day we’ve had.

We crossed the Bernera Bridge which is the only reason the island of Bernera is inhabited now. It was built in 1953, prior to that there was a ferry on demand and small boats were also used to transport people and goods. The first truck on Bernera was a 5ton Bedford lorry taken across on wooden planks laid across a fishing boat. Many islands around Lewis are uninhabited because crossing to facilities has become too difficult without a bridge to the mainland.

Lena has been searching for family graves and it’s been interesting seeing the different headstones and layouts. One thing I have found interesting is that a many headstones include the croft number.

One resource which would seem to be inexhaustible here is stone so it’s no wonder most memorials are constructed using the available stone. Creative designs are everywhere and not only in memorials but also buildings eg Visitors Centres, fences, shelters, marker cairns and of course houses.

For dinner we met up with just a few of Alex’s cousins, people he hasn’t seen for 39 years. The last time we saw them we were touring around on Trail Bikes and sleeping in a tent but Uncle Iain insisted we stayed at their house. I remember the young lad, Murdo, taking us out in the fishing boat to check the net and finding a salmon that had a big bite taken out of it by a seal. That young lad is now the father of seven, the youngest is 15!

Many gravestones include the croft number in the inscription.

Only the camera could see inside.