Today we decided to give the new suspension a try out on some dirt tracks so we went to Mt Mee and D’Aguilar National Park. We found that our little leaflet maps weren’t very helpful beyond The Gantry which is on the site of an old sawmill. Massive Beech trees were processed there. A vintage car club was heaving an outing there and looked very civilized having their morning tea on the grass. We walked to the Bull Falls which were just a trickle but the environment was lovely. Some big Staghorns were growing high up on trees and the atmosphere was all rainforest. Lots of different lichens were growing on rocks as well as on the trees. We could hear Whip Birds but didn’t spot any and the little birds flitted about so quickly we had no chance of getting a good look at them.

After the walk we decided to drive along the Escarpment Track which seemed to be a loop and rated “green” so just an easy dirt track but it deteriorated after a while and one section had deep ruts on a steep slope. It wasn’t scary but would have been if we hadn’t had similar experiences with the Jeep Club. The environment was quite different in that area, big Gum Trees and no thick understory.

We eventually came to a junction and took a punt on a track which seemed to be running back towards our starting point but after a while decided it was foolish to continue. We had no idea what the track was like ahead and no idea where we would end up so we returned to the junction. Two cars were there and the drivers were trying to decide which way to go, luckily one driver knew the area and told us if we’d continued on the other track we would have come to a locked gate blocking our way. We decided to go back the way we’d come which meant we didn’t manage a loop but did make it out of the park without any stress. The work done on the car seems well worthwhile, the ride is much smoother.

Our first thought when we left the park was to find somewhere for brunch but that didn’t happen. When we passed through Caboolture, The Show was on so there would have been all kinds of food available but the crowds weren’t appealing and we came straight “home”. I was really looking forward to Pancakes with all the trimmings but we were too late, that was on the breakfast menu which didn’t extend to 3:30 so we settled for toasted sandwiches. The Sea Salt and Vine Cafe was buzzing, I guess places along Moreton Bay make a nice day out for people from Brisbane. 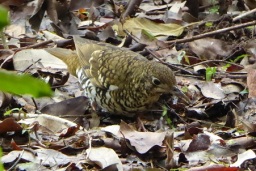 Bird scratching about in leaf litter. 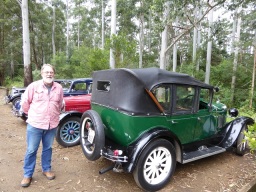 I thought the number plate said Old Vintage which I thought was apt, Alex says it was Qld Vintage. 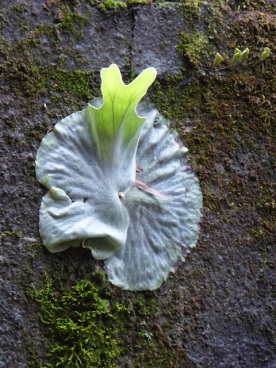 Elkhorn growing on an old water tank at The Gantry 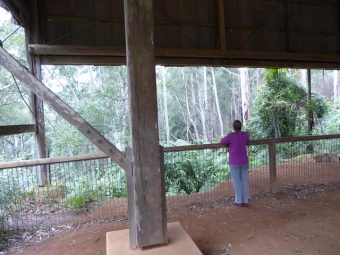 View from The Gantry. 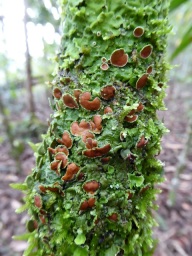 Lichen on a tree.

Both of us could be asking, “Should you be here?”

Scarborough Beach, with a cruise ship lit by the sun.