Because we were only travelling about 250kms today we knew we had plenty of time to look around Emerald and we started with the old Railway Station, it’s very elegant. You always hear about the railways opening up the Wild West of the USA but I’ve never thought that applied here in Australia but it seems that is what happened, at least in the eastern states. Emerald only developed because of the railway. It got its name because of the lush vegetation but at the moment the only lush areas are irrigated.

Walking across a park we were confronted by the biggest easel in the world, on it is a representation of a Van Gogh, Sunflowers painting. I loved it but we were completely bemused about the reason for it until we read that sunflowers used to be grown in the area. It seems a shame to me that beautiful paddocks of sunflowers have been replaced by ugly mining operations. Going from Emerald to Springsure we passed a massive conveyor and a line of wagons waiting to be loaded with coal from the Minerva Mine.

We decided to spend some money at the “Corrugated Cuisine” eatery we’d seen advertised but the business was defunct. It seemed such a shame. The Rolleston townspeople had put a lot of work into a park, renovated interesting old buildings, provided parking for travellers but the only place to get anything to eat was the service station/general store which didn’t have much at all.

Our campsite here at Takarakka Resort is nice and wide, the facilities are good and there are walking tracks starting at the campsite. We had a little chuckle when another camper was telling us about the awful site they had at Emerald, right beside the toilets and they’d booked 10 weeks before. Ours was great and we didn’t book. Not only that but she bought a sandwich in Rolleston and it was stale, we came after and got a nice fresh one. Seems like when you’re camping everyone gets stuck by the toilets or dump point sometime. 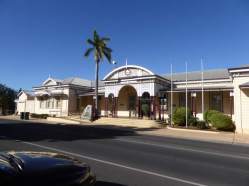 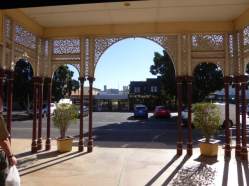 Looking out from Emerald railway Station 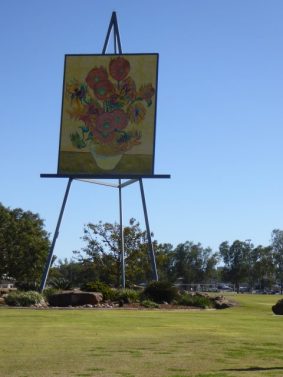 The biggest easel in the world!

A dragonfly we rescued, warmed and set free.

A l-o-n-g line of coal wagons.

Great welcome to the town.

Living in luxury …. for a while.