Today we set off on our first stage of the “Darling River Run” which was from Bourke to Tilpa via Louth. It was a dirt road but had been recently graded because the races were on at Louth and they knew lots of people would be using the road. A few caravans were using the road but they wouldn’t have had any problems.

Louth was a lovely surprise for me, Shindy’s Inn had a wonderful display of bush memorabilia including a fantastic bike. I loved it. The publicans were away fishing “at the Top End”, (Northern Territory for those unfamiliar with Australia) and the person working in their place wasn’t able to tell me the story of the bike other than it belonged to a shearer. I love it because there is so much evidence of the owner on the bike, like the hessian used in different ways, his stitching of it, the wooden stick used as a support for his cup, his billy, toolbag, cigarette tin and axe. In the hessian bag are tins, maybe they held food and most importantly his shears. There are boxing gloves on the back and I know that in the 1920s it was common for men to try to earn money in boxing matches.

On the walls were displays of rabbit traps, mincing machines, saws, horse bits and pieces etc. It was a great place.

After Louth we headed towards Tilpa where we intended to stay. The road was dirt but in good condition. There were lots of cattle some just wandering carefree across the road. Although we were on the River Run we hadn’t seen the river which was a bit disappointing so when we did glimpse it as we passed Alex reversed back down the road until we could get a pull off. There was no need to worry about other traffic we hadn’t seen any and none appeared then. In about 2010 we watched a TV programme about two men going down the Darling in a tinnie, they came to the conclusion it was less of a river and more of a muddy creek and we agree. Most of the time you can’t tell it’s water until the sun glints off it or there are ripples because it’s the same colour as the banks.

There were great swathes of little flowers, yellow, mauve, purple and white.

To say Tilpa was disappointing is putting it mildly. We’d read that they had the world’s best hamburger at the “Trading Post” but we could only find the pub and the school opposite. There were hordes of kids playing in the school so I asked a woman who came out of there but she said she didn’t know the place at all. She was part of a two day get-together for children and their parents who live on remote stations and learn in isolation, they were all camping behind the school. I asked another man and he said there was no Trading Post but you could get anything you wanted at the pub. We gave up and had a hamburger at the pub which was nothing like the Shindy’s Inn at Louth. We decided not to stay in Tilpa.

The road from Tilpa to Wilcannia was the roughest section with clear damage caused by vehicles using it when it was wet. Lots of deep gouges, run offs at the edges and also other rocky sections. The cattle grids also needed care because the road base didn’t meet the grid on the level. We arrived in Wilcannia about 4:00, found the camping ground and discovered we just had time to collect the key to the toilets & showers from the Council Offices. The time it took I did think Alex must have been filling out an application to erect a temporary residence on Council Property!

As we sit in the camper surrounded by big Gum Trees we can hear water falling over the weir, a very nice setting.

Photo of a shearer and his bike. 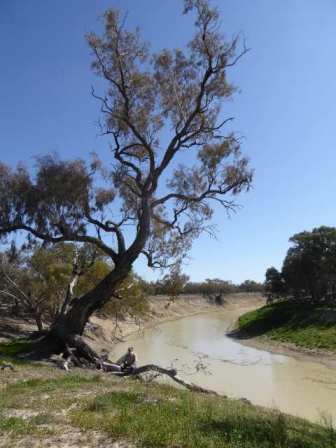 Distance Education kids getting together

Pelicans waiting for fish at the weir

Ibis and an Egret overlooking the weir 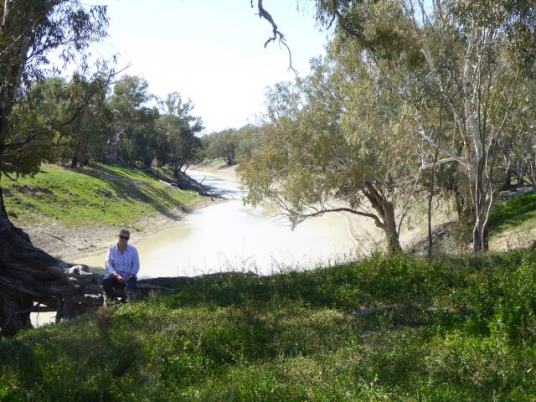