Last night I suffered from other people’s negative stories about camping in Wilcannia, every time the chair creaked I imagined it was someone reaching into the camper. Eventually I realized it was just the wind blowing the canvas against the chair but I’ve been tired all day! Wilcannia seems to me to be a town struggling to rebuild itself after its loss of identity as a flourishing river port. Other towns seem to have found a way to promote themselves which results in increased tourism and prosperity. There are lovely old buildings in Wilcannia but also a lot boarded up, I hope the efforts the town is making pay off for them.

Despite our disappointment with the River Run we continued on that way. Some sections of the road had ruts and holes or stretches of greyish soft sand but there were also good hard packed sections. The car is covered in dust but we haven’t been worried by it getting inside.

We stopped to view the “Menindie Lakes” which are now stretches of dry ground and then the grave of Dost Mahomet. He was a cameleer with the expedition to cross Australia from south to north in about 1860. He survived because he was one of the four left behind at Coopers Creek when Burke, Wills, King and Grey continued north. The party of four came back to Menindie and he stayed there, his grave is on the site he chose to say his prayers every day.

Pooncarie was our next stop where we checked out the old wharf which doesn’t exist anymore but there was an interesting sight. Across the river was a boat suspended from a tree, it showed the river level during the flood following Cyclone Yasi which devastated Mission Beach and other parts of FNQ. We were astonished when we went to buy a drink to see about 20 motorbikes at the shop and even more amazed when we realized they were a group of mostly BMW riders some of whom had been on the BMW trip to Tasmania in November. Here we were in Pooncarie a town with a population of 80, in the middle of nowhere and we ran into people we’d been on a ferry with last November!

With very dark clouds covering the sky we headed straight for Wentworth having decided to hire a cabin for the night. The views at Willow Bend Caravan Park are lovely despite the fact all the Willows have been removed for environmental reason. It’s by far the nicest river setting we’ve stayed at. 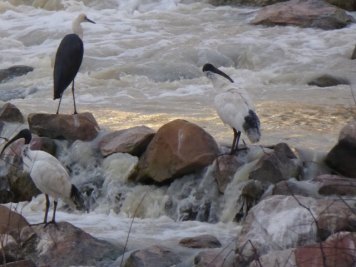 Early birds at the weir, Willcania

The wheelcover is VERY dusty. 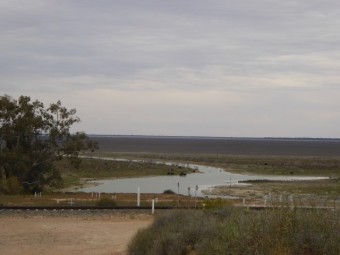 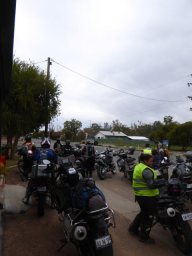 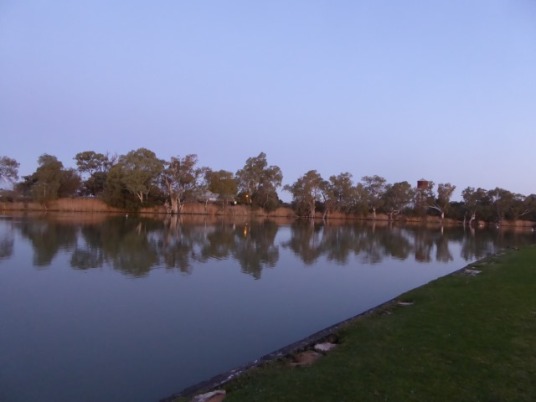 In New South Wales almost back into South Australia