Waking up this morning was lovely, seeing the sun rise over the river and that was when we were still lying in bed. There is one issue with that though, if we can see out in the morning then at night people can see in. I’m going to do a spot check tonight to see just how visible we are when we’re inside. The windows are tinted and there are bug screens but there are no curtains.

As we drove out of Blanchetown we spotted a Take Away shop so think maybe there could be more to the town than we saw.

I drove back and forth between Adelaide and Berri many times when I was working there but my only visit to Waikerie was just as far as the Service Station on the main highway and that was to phone Dad because the car had broken down again. Today we called in and were surprised at the size of the town. We went looking for a cafe and there were about four in the main street but fried food seemed to be top of the menu, I thought one was selling “Pork Giblets” until I did a second take and saw it was “Pork Riblets” either way I didn’t want any. We had Devonshire Tea then headed off again for Renmark.

I was driving today and was very relieved when we finished the day with the gearbox apparently still in working order.

For those who might be wondering, it’s clear that although we haven’t been on the road for quite a while Alex’ membership of the Old Codgers Club is still current and members have been delighted to engage him in conversation.

This afternoon we walked into the town centre to the Telstra shop because I had a problem with our WiFi station. I don’t know how many steps are logged on Alex’s Fitbit and I can’t ask him because he’s now sleeping off the effects! It was a lot further than the 4kms round trip the lady at the Caravan Park told us.

Tonight the Caravan Park is again right beside the river and the Pelicans are nicely aloof. I think people are getting the message that feeding the wildlife makes some of them aggressive and belligerent Pelicans are not nice to meet.

Tomorrow we move on to Mildura.

View through our camper window

The brand new camper has been sitting unused at home now for almost 2 months due to our issues with the Jeep and the horrible weather but it’s now comfortably sitting on a plot at the Riverside Caravan Park, Blanchetown. Thankfully we had a trouble free trip up the freeway then through the hills to Hahndorf, Balhannah, Mt Torrens until we stopped at Angaston for some warm sustenance. I did have my heart set on some nice warm soup with a sour dough roll but the offering of the day was Cream of Broccoli and that had me looking at the menu for a second time. I decided to go with Alex’s choice, an “Ango Pie” and it was brilliant! I’ve never before had a pie with beef, bacon, leek, cheese, mushrooms and red wine gravy.

Our next stop was near the Fruit Fly quarantine bin where we ate our bananas and apples then travelled on to Blanchetown. It’s not a big place but does have a pub, Post Office/General Store and quite a large Council Office/Medicare/Centrelink/Rural Transaction Centre/Library/Internet access hub. We went for a walk to Lock 1 but we couldn’t walk across it and there was a lot of work going on all around it so after reading the various informative noticeboards ( 13.5 tons of carp taken from the water last year) we went back to the caravan park to see if the Vanilla and Caramel Slices we bought in Angaston were as good as the pies. They were.

After eating those, of course, we needed another walk so headed off along the river in the opposite direction. We upset a lot of nesting Cockies along the way.

I enjoyed checking out the names on the various “shacks” and also comparing the styles, sizes and states of them.

Now we’re off to the Pub for tea …unless only Broccoli Soup is on the menu, if so we’ll come back for some Cup a Soup.

Stopped at the quarantine bin

Set up at Blanchetown 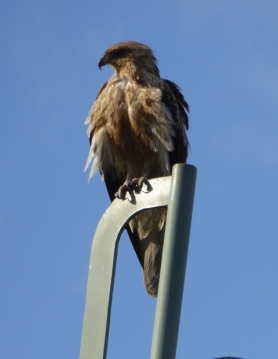