In Search of a Castle

Some people are fascinated with castles so we thought before we leave Inverness we should get a photo of one with turrets. Castle Stewart seemed ideal so we set off to find it and we did, the problem was it’s privately owned, the gates were shut and we couldn’t get a good view of it. We drove to Castle Stewart Golf Course thinking we might get more than a glimpse from there and besides it would give The Golfer a chance to see what it was like. He liked what he saw but the castle view wasn’t gratifying.

Cawdor Castle seemed like a good idea but when we arrived there a sign said it was closed from October to April and there was no clear view of it from the road. The next castle was only a mile or two from there so we went in search of that. Although a B&B operates from it the only hint of it’s whereabouts, after we left the main road, were two imposing gate posts. Kilravock Castle is nowhere near as imposing as the other two but at least we could get close. There is an Arboretum and the oldest tree there is a Sweet Chestnut believed to be about 370 years old but there were many very impressive trees in the grounds. The best thing about going there was seeing a Red Squirrel fossicking about in the leaves and racing up trees and posts, it was tiny.

Our search for a castle to photograph ended there.

Some towns have Gaelic names though the spelling might be different others just have English ones.

It’s lambing time, I think these are Hebridian Sheep.

Swan on a backwater.

Now why would there be a smiley face? 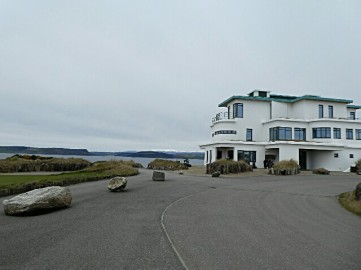 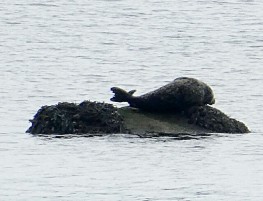 Castle Stewart from the Golf Course