I’m so glad we weren’t in the camper last night. We had STRONG winds, lightning and thunder, who knows what blowing across the roof as well as beeping from unknown devices switching back on after a power failure! This set the scene perfectly for us to continue our journey up the “Shipwreck Coast” today.

One of the worst Australian maritime disasters was the wreck of the SS Admella in 1859. The ship was sailing from Adelaide to Melbourne when she struck Carpenters Reef and 89 people died. On the second day after the ship struck the reef two sailors managed to get ashore and set off to find help at Cape Northumberland lighthouse near Port MacDonnell, about 20 miles from the wreck. We drove along the coast road following their route but in reverse.

From Mt Gambier we drove back to Port MacDonnell then continued the trail to Cape Douglas. The weather was so wild it was easy to imagine the struggle the sailors endured. From Cape Douglas we went on to Nene Valley, Blackfellows Caves, Carpenter Rocks and the Cape Banks Lighthouse. I don’t know why the lighthouse is wrapped in plastic but that won’t last long in the wind. We certainly appreciated the sanctuary of the car. 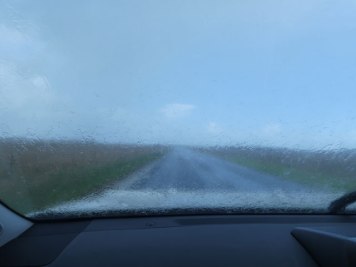 The Admella crashed onto the reef and broke into 3 pieces “a short mile” from shore.

The Admella was carrying 113 people, 6 horses, 93 tons of copper and general goods.

John Leach and Robert Knapman made it to shore in a makeshift raft.

On the 2nd day 15 men managed to get from the fore to the aft section.

Within 2 days everyone else on the foredeck perished when it broke up.

On the third day there were only 70 people left on the wreck.

Leach and Knapman walked barefoot through this terrain to Cape Northumberland Lighthouse..

By the third day only 3 thimblefuls of dried milk, a few currants and some brandy was left for each person.

On the fifth day John Hills put on a lifebuoy and started swimming to shore. He suddenly disappeared, believed taken by a shark.

Survivors clung to the wreck for over a week. 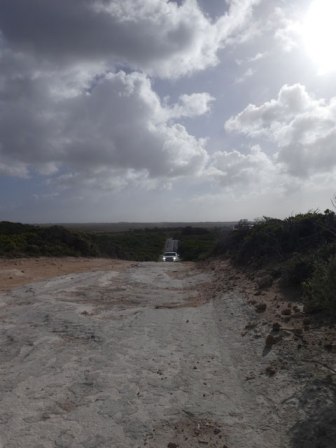 Despite their poor condition Leach and Knapman were the first to volunteer for the rescue mission.

Driving back home along the Riddoch Highway we came upon “Father Woods Tree” and some chainsaw sculptures. Another reminder of what we usually miss when we don’t investigate the “brown signs”. You can find information on Father Woods here.

Father Woods Tree – a favourite place to conduct services, sit and marvel at nature or write.

Primarily a geologist Woods was also a capable palaeontologist, botanist and geologits.

Residents of the South East in 1867 said of Father Woods, “Your gentlemanly conduct and kindly bearing have won for you the respect and esteem of all classes and creeds.”

Now we’re back home for a few weeks.