I feel now we’re leaving true isolation behind, we’re close to the Stuart Highway, a sealed two lane road that goes from Port Augusta to Darwin. Getting here though involved about 270 kms on mostly single track road. I’m on edge driving up a crest when I know any traffic approaching is going to be using all the road but we managed to pass and be passed without incident.

The rest stops were regularly spaced and made for convenient driver changes.

We did have one “moment” when an eagle delayed its takeoff from some roadkill just too long and although Alex had slowed down it still seemed to almost fill our windscreen with its enormous wingspan. It managed to lift enough to avoid the car and camper.

At the Highway Inn we refuelled before travelling on to Daly Waters. We’ve been here before but never stopped for more than a drink at the pub. We’re not alone camping here, there are over 100 other vans, campers, motorhomes etc here.

Guide to our site on his postie bike

There has been an airfield here since 19…. and although the old hangar isn’t utilised flights still use it. We also checked out John McDouall Stuart’s tree, you’re supposed to be able to see the “S” he carved into it but you need more imagination than I have.

Ah, so that’s how you lose the belly!

There is also a Flying Fox that was used to get food supplies across to the town during flood times because the airfield was on one side of the river and the town on the other.

We went to Happy Hour at the pub and the “Pitt Family Circus” was performing, they were good. Definitely a step up from the usual Bush Poet entertainment and we can hear live music playing now while Alex is cooking dinner. 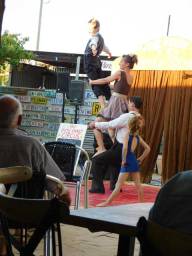 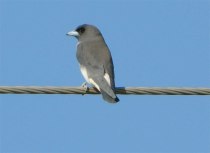 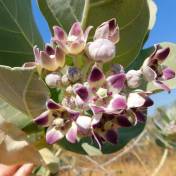 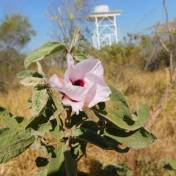 Another day of driving, about 470 kms. You might wonder why we didn’t stop somewhere on the way but in this area there’s no where to stop unless it’s a layby occupied by billions of bush flies. No thanks.

The road was sealed but mostly single track and some parts were very undulating and patched. The weirdest section had long, deep ruts which seemed to have been caused by an extremely heavy transporter when the bitumen was soft. We’ve travelled on plenty of rutted dirt roads but never a bitumen one before. 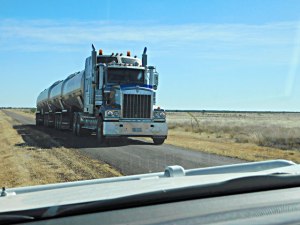 No sharing the road with these guys.

The vegetation changed from almost stony desert to pancake flat savannah grassland then a shrubby treed area. If the “Fount of All Knowledge” could remember the name he sprouted so many times when we drove up the Stuart Highway years ago I’d be able to tell you exactly the type of vegetation that is.

We’re now at the “Heartbreak Hotel” Caravan Park. You might wonder why it’s called that and the version I like is that there was so much grief involved in the building of the place. Planning permission, getting workers, equipment and resources to the place and I guess dealing with the weather too all caused the owner enormous problems. The tradies decided the best name for the place was, “Heartbreak Hotel”. The alternative theory is that the owner’s marriage broke down, probably because of all the stress caused by building the place, and once again the tradies decided the name was most fitting.

The Heartbreak Hotel is at Cape Crawford which isn’t a Cape at all. A bend in the Macarthur River bounded the property of a Mr Crawford, and in the wet season when the river flooded he thought it looked just like a Cape jutting out into the ocean so he called it, “Cape Crawford”.

Once again there is no Telstra coverage here so no phone or internet unless you have Optus. At “Happy Hour” we were talking with two guys involved in driving heavy vehicles to mine sites, they agreed that Telstra was the only service provider you could rely on out bush but the company is failing in that area now.

Orroroo Caravan Park is still in a league of its own when it comes to clean amenities and I think the last couple of places we’ve stayed at in the running for the Wooden Spoon!