Yesterday evening smoke was billowing into the atmosphere darkening the sky. It was a few kilometres form here but if I’d been at home I would have left the area because for a while we could even see the red glow of the fire. Before we went to bed though it had died down. This morning everything was covered in burn debris but nothing showed any sign of damage.

After hosing off the car we set off for Darwin. I needed to buy a new pair of sandals because my other ones broke and it’s definitely too hot for me to wear sneakers. We also wanted to have lunch on Stokes Hill Wharf, for old times sake. Along the way we passed several of the WWII landing strips, it’s difficult to imagine planes landing on them. City driving is stressful after so much time out on country roads but we quickly found a 2 hr park near the Law Courts and the cathedral. 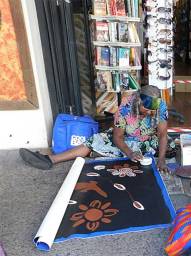 Lovely lady painting in the Mall

If I’d wanted thongs I could have bought some from any of half a dozen places but the only place to have practical sandals as opposed to fashionable ones was a camping/ adventure shop. The store didn’t seem to have changed much since we were there about 16 years ago.

We went to the wharf after that where we had a nice lunch and I was able to upload a post using the free WiFi.

The Fisherman’s Wharf was our last stop before heading back to Litchfield. The boats moored there look all business, tough and purposeful.

Back at camp I went looking for birds while Alex read the paper. It seems to us that every paper has some story about a crocodile …… possibly only during tourist season……. and today’s front page was about people being rescued at Cahill’s Crossing. The incident happened in May so they must have kept it on ice until there were no other croc stories.