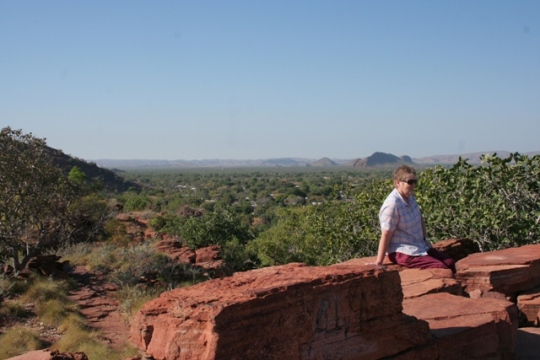 Today was a laid back day. First we drove up Kelly’s Knob to the lookout over Kununurra then we went to see the Sandalwood Factory and they certainly had a big range of products but not cheap.  The informational video was already going when we walked in and the slant seemed to be this is a wonderful industry to invest in. I was hoping to see how they extracted the oil but either that was shown beforehand or my impatience spoilt my chance to see it. After we left there we called into the rum distillery and that place was excellent. Don’t know any more about rum making but the displays they had and artefacts were brilliant. The hat rack was a wooden backboard with inverted brass taps as hat hooks. Stuff had been recycled everywhere and looked fantastic. There were photos reproduced on canvas and the accompanying text made them so much more interesting. People with great creativity have been involved with the place. The cheesecake and chocolate cake with rum were pretty good too and I enjoyed my first cup of tea for ages. 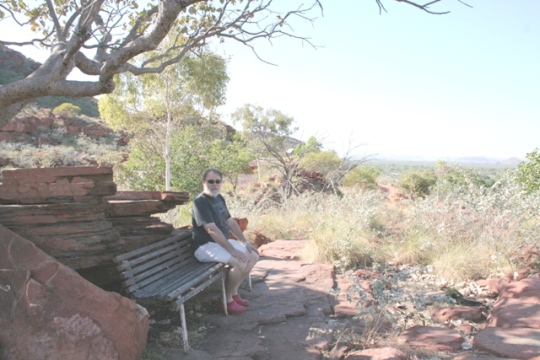 The Zebra Rock place was next on the list and we bought a couple of small things. The water near the pontoon at the lake was seething with fish, mostly Catfish or Silver Cobbler if you’re trying to make them sound more desirable. I took photos at Lily Creek Lagoon and Alex checked out who was deemed remarkable enough to have a tree planted in their honour. Not everyone’s had survived and some were probably removed by people who disagreed with the planting. 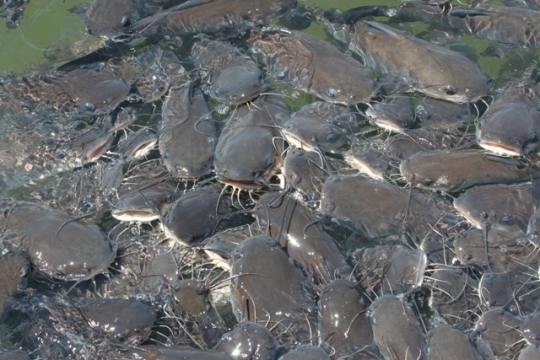 A mess of Catfish 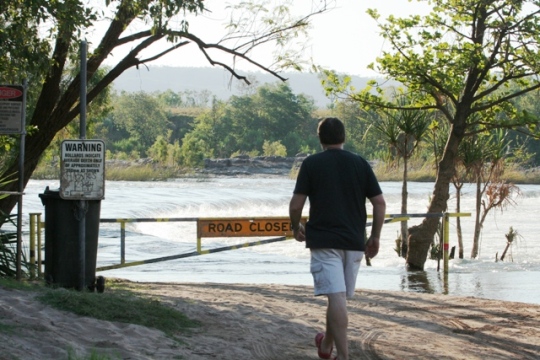 Alex checking out the road prior to crossing!

The last place of interest for the day was Ivanhoe Crossing, Alex was itching all day to test out the car at a proper water crossing. I think I might have bad dreams tonight about river crossings!

Tomorrow we’re leaving Kununurra and heading towards El Questro which is in a National Park. We’ll probably be out of internet range for days, maybe a week or two. I’ll be overloaded when I get back online!

Had an uneventful drive to Kununurra past more amazing rock formations. Came to Hidden Valley Resort on the recommendation of another camper but we think he was misguided. There are lots of permanent residents, dogs and stinky bins. The couple next to us have a young baby, less than a year old, and have 2 tiny tents and are travelling in a single cab ute with 2 dogs. There isn’t much communication between them and none with other campers. Alex finally got his Barra & Chips, the serve was ENORMOUS. We walked in not exactly directly then coming back ended up at the highway to Wyndam so had to walk back to the place we’d parked during the day and find our bearings from there. Next time the GPS comes with us. My editor is currently asleep in the chair, glass in hand,  he didn’t have a siesta when I did this afternoon. Yesterday a near neighbour had a generator going day and night which meant we were both very tired today.