Before heading off to Launceston we went to Barnbougle –Lost Farm, the Course aimed at those who like a more manicured course and accommodation in a resort setting. When Alex had seen all he wanted to we left for Scottsdale again as that was the better way for us to get to Launceston. After our breakfast at the Cottage Bakery in Scottsdale we headed for Launceston, the roads were again twisting and fairly narrow but nothing scarey. We stopped at a lookout which gave us a great view of the valley with Scottsdale below, a couple of the BMW riders who had been on the ferry coming over also stopped at the lookout. Their bikes looked as though they’d been over a few rough dirt roads. There were some more wood sculptures at Springfield so of course we had to stop there.

Because we’d left early we had plenty of time to spend in Launceston so we prowled around the town after we found a park. That’s not so easy when you have a camper attached but we did manage it and the meter was the type where you key in your space number then put in the money. There is no ticket to display, all the info for the different parking spaces are in the one meter. When we’d tired of the city we went to Cataract Gorge and on the way in Alex spotted a nice big Echidna. There was of course the obligatory U turn when we continued up the road instead of turning into the park. There were raucous Peacocks in the park and plenty of steps and you know whenever you go down you must come back up!

After Launceston we just drove up the main freeway to Devonport, found a park in the Woolies carpark and walked into town to get something to eat before heading to the Ferry lineup. Unlike last time I managed to stay awake and stood on deck until the ferry left Devonport and it became too cold. We watched the sunset through our cabin porthole. The crossing this time was gentle with no rocking, rolling or crashing of the hull into waves so we had a good night’s sleep.

Leaving the reception area of Barnbougle Dunes on the last morning.

Alex picking up the lost umbrella -owner was just a few metres away and hadn’t missed it.

Barnbougle, Lost Farm -what chance of finding that lost ball?

More great woodcarvings beside the Tasman Highway, at Springfield. 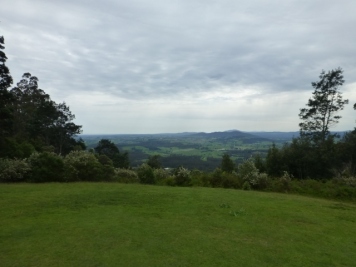 Sideling Lookout looking towards Fliners Island and the north coast.

Peacock in the gardens, Cataract Gorge. 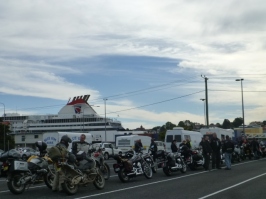 Some of the not-so-clean bikes at the end of the rally plus some imposters.

The Geriatric Geezer persona had to be put on hold for the day, that wouldn’t have gone down well once he’d made a couple of slipups and people realized it was just a role he was playing. I think he would have just been Alex, the golfer, for the day. He couldn’t have picked a nicer day, there was sunshine and no wind.

After my session at the Scottsdale Library I went off to find some caches, the first was in a gorgeous park with ponds, little bridges, gazebos etc. The kind of place that thoughtful cachers choose to hide their little secrets. The second was near the cemetery not far from some graves, I think there might have been bad bushfires in 1990.

I headed back to Bridport to check out a Wildflower Sanctuary which was a bit disappointing but I certainly enjoyed the lunch I’d bought at the Baker’s in Scottsdale. The caches I found were all close to the beachfront and by the time I’d finished I needed to change into cooler clothes. I did a few more walks about the town before heading back to Barnbougle, by then it was 4 30. I thought Alex might be sunburnt but only the backs of his legs were red. They were also almost at the point of twitching too because he’d completed 2 rounds, 36 holes in a day! Both rounds he was able to play solo which pleased him.

After some recuperation time and nice showers we went over to the clubhouse for a meal in The Bistro. There were some very interesting trophies sitting on the big fireplace mantelpiece, my favourites were a real Crow, beautifully stuffed, and a big bone on a rough wooden backboard. I don’t know the stories behind the trophies but the bone one was for a women’s group. We had a very nice meal though not the lobster Alex was anticipating. Wallabies came out to feed in the tall grasses while we fed inside.

It was an excellent day for both of us.

“The Groper/Trout rock south-east of Derby.

One of few lovely little flowers I spotted in the Wildflower Sanctuary, Bridport.

Interesting plants beside a pond in the Scottsdale park.

Gorgeous park in Scottsdale near the Caravan Park. 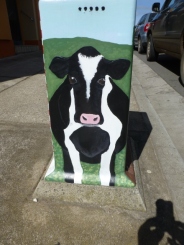 Some kind of electricity box cover in Scottsdale.

Back view of the electricty box cover.

The Derby Grope/Trout depicted on one of the electricty box covers in Scottsdale.

The old pipes linking the aquaduct were made of wood wrapped with wire.

The sun came up and we got up, very quietly since all the other campers were sleeping. We managed to be all packed up before the Baker’s was even open so then we had a walk along the beach. There are oyster and abalone shells all along the beach and the ducks were out dabbling in the seawater again. Breakfast was at the Baker’s Shop.

Not far north of Cole Bay is a wetlands and sanctuary called, “The Moulting Lagoon Game Reserve” and having walked into it I can only say the name is apt, there were heaps of feathers all about. An Egret was standing at the water’s edge when we arrived but immediately took off and all the black swans moved away from the shoreline. There wasn’t much for us to see but I’m sure it would be very different during the breeding season when flocks of other birds arrive.

We still haven’t seen a Tasmanian Devil but we did see a Peacock today, I think she was an escapee. Why are they always called Peacocks? No-one ever says Peahen but it wasn’t a male.

St Helen’s was an interesting place with a busy wharf. We walked along the jetty and noticed various people working on their boats, many of which had stacks of cray pots on deck. Two men were working on a boat engine, one was operating a winch and the other had his head below deck in the workings. We walked to the end of the jetty then came back and when we were level with the boat with the faulty engine there was a bellow of, “You useless f…… piece of s……..”. The winch man caught my eye so I said, “It’s not going well then?” He grinned and said, “No, it’s not going well.” The Geriatric Geezer thinks I’m lucky the man below didn’t hear me or I would have scored a double dose of expletives. (Later in the day we walked along the Bridport wharf but decided it was probably wise not to go to the end where workers from the loaded sheep carrier were talking with other boatmen.)

I realized today that I only had my hikers’ boots accessible, all my other shoes are stashed under the bed in the camper which we weren’t going to open again until we got home. I didn’t think I’d be abIe to relax in the Golf Club dining room wearing hikers’ boots so I decided to look for some shoes in Scottsdale. There was a great shoe shop with a very friendly owner and the Geriatric Geezer excelled as a sales assistant. I bought some shoes and am relieved we don’t have to reopen the camper.

I think the Geriatric Geezer is in Golfers’ Nirvana, he’s booked in for a round on Barnbougle Golf Course starting at 7:20 but will be out pottering long before that. I’m going to enjoy the comfort of our cabin then go in to Bridport. There are walking tracks and a wildflower sanctuary so I’ll enjoy those. I might go back to Scottsdale to the Library which has WiFi, I’m having no luck connecting here even though it’s available and the Library in Bridport is closed on Thursdays! Before we go away again I’m going to get a tablet so I don’t have to cope with text that leaps inexplicably from place to place and an Internet dongle so I don’t have to rely on anyone for Internet access…….. or I could give up blogging and just veg out!

Take note, you CANNOT bring your ferret to Moulting Lagoon! 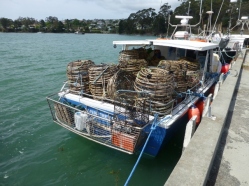 St Helens, reminds us of Stornoway again but I think this one is more colourful.

Mum was running out of wood so the boys took the chainsaw out to top up the woodpile. 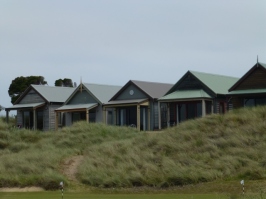 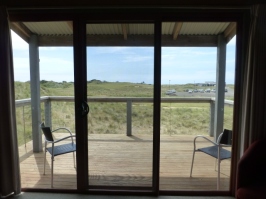