It was nice having a second day here, it gave us a chance to just potter around. We went to Emu Bay for a morning coffee and that place has also grown immensely since we were last here. There were some interesting memorials along the foreshore including a “singing ship” which didn’t really sing much today even though there was some wind. I can’t imagine what the noise must be like when a cyclone is on its way. There were still signs of damage from the last cyclone with roofs still covered with tarps and windows needing repairs. The boardwalk is new too and it’s easy to see where sections of beach have been damaged.

After our lunch we went for a long walk on Kinka Beach there were little balls of sand creating strange patterns on the beach and then we spotted a couple of tiny crabs, less than 1 cm across. I’m not sure if they made the little piles but later we saw hundreds of a different crab species and they certainly made sand piles. They raced across the beach sometimes towards the water and sometimes away from it. When they felt really threatened they madly dug themselves into the sand leaving a pile above themselves. We watched one “big” specimen take over another one’s sanctuary but there was no fight they both just dug down more.

Tonight there was a lovely sunset and as the sun went down in the west a full moon came up in the east, it was stunning. A lady told me it’s to be an exceptional yellow moon this evening but my little point and shoot doesn’t seem able to capture the moon very well. 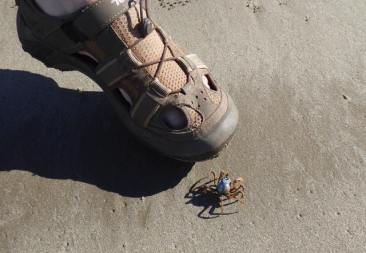 This little guy will have a story to tell.

Attack crab … not really, it just wanted to get away but we thwarted his plans.

Heading for the water

We didn’t get Internet coverage at Kinka Beach so yesterday I posted when we had breakfast at Emu Park, today I’m posting from a truck stop near Marlborough, not one I’d put on any “Must Stop List”.